‘Enhancing North Dakota agriculture through the production, promotion and distribution of pure seed.

The name of the corporation shall be: North Dakota Crop Improvement & Seed Association. It shall be referred to hereafter as either the “Corporation” or the “Association”.

The Corporation shall be organized exclusively for agricultural purposes within the meaning of section 501 (c) (5) of the Internal Revenue Code. Within this general limitation, the specific purposes of the corporation shall include the following:

D. To serve as a communication link for North Dakota seed producers, users, and the seed industry in legislative matters relating to production and marketing of their products.

F. To maintain regular channels of communication between all members of the association.

The association shall have all of the powers of nonprofit corporations described in section 10-33-21 of the North Dakota Century Code.

A. Membership in this association shall consist of each County Crop (Agricultural) Improvement Association and their current members with a paid-up annual membership of $100.00.

B. Membership in this association shall also consist of any North Dakota nonprofit crop based commodity organizations with a paid-up annual membership of $100.00.

C. With the payment of a $25.00 membership fee, all growers, seed conditioners, elevators, businesses and employees of Federal, State and County governmental agencies, and other interested persons may become non-voting members of the North Dakota Crop Improvement and Seed Association.

D. Each county association with a paid membership shall elect four delegates, which may include seed conditioners, to cast votes on issues placed before the membership at the duly called annual meeting.

E. Each non-profit crop-based commodity organization with a paid membership shall be entitled to four delegates to cast votes on issues placed before the membership at the duly called annual meeting.

F. Delegates shall be certified to the executive officer no later than registration time prior to the annual meeting with the option of vote by written proxy of delegate substitution permitted. Each delegate shall be entitled to one vote only.

G. A quorum shall consist of 60% of the certified voting delegates. General procedures at membership meetings shall be in harmony with the principles set forth in “Roberts Rules of Order Revised”  So far as they do not conflict with any provision of the bylaws.

I. Written or printed notice stating the place, day and hour of the meeting and, in case of a special meeting, the purposes for which the meeting is called, shall be delivered not less than ten nor more than fifty days before the date of the meeting, either personally, by mail, email, listed on the website or at the direction of the president, the executive officer, the officers or persons calling the meeting, to each member entitled to vote at such meeting. If mailed, such notice shall be deemed to be delivered when deposited in the United States mail addressed to the member at his address as it appears on the records of the corporation, with postage thereon prepaid. (N.D. Century Code, 10-33-68).

J. Notice of a special meeting of the membership must contain a statement of the purposes of the meeting. (N.D. Century Code, 10-3-66.)

ARTICLE V. BOARD OF DIRECTORS

A. The board of directors shall be responsible for the governance and the general administration of the Association.

B. The Board of Directors must be active producers in the district they represent.

C. The Board of Directors shall include three directors elected from each of the following districts:

D. These District directors shall be elected on an annual basis for rotating three-year terms at a duly called district meeting of County Crop (Agricultural) Improvement Associations or district caucus at the annual meeting. Each county shall have four votes to elect directors and transact such business as may be brought before the district meeting.

E. A Director missing more than two meetings (i.e. Board of Directors meetings, NDCISA Annual meeting and District meeting) on an annual basis, may be removed from the Board of Directors and replaced at the next District, or district caucus meeting.

F. Each director shall be eligible for only three consecutive terms. A director who has served three terms may again become eligible after a period of one year has elapsed from his or her last expired term.  If no one is nominated for the Director position in the District, the Board can appoint someone from that District and that individual could be the person currently on the Board.  That appointee would be eligible for a full 9-year term.

G, Any unexpired term shall be filled at the next annual meeting and shall be regarded as a full term upon completion thereof.

K. If there are special circumstances that restrict the board from meeting in person, the president of the board can request that a regular meeting shall be held via conference call and or virtual web-based applications. Virtual votes may be made at these meetings under Roberts Rules of Order.

I. A per-diem will be paid out the board of directors/ex-officio directors upon attendance of an in person regular meeting. The pe-diem amount will follow the State rate for per-diem.

F. The executive officer shall keep correct and complete books and records of account and shall keep minutes of the proceedings of its members, board of directors, and committees having any of the authority of the board of directors; and shall keep at the corporation’s registered office or principal office a record of the member counties and the names and addresses of its members entitled to vote. All books and records of the corporation may be inspected by any member, or his agent or attorney, for any proper purpose at any reasonable time. (N.D. Century Code, 10-33-80). In addition, the executive officer shall conduct necessary or appropriate correspondence of the association, provide publicity, present a report of the year’s activities at the annual meeting, and perform such other duties as may be required by the board.

G. The position of the executive director is to manage the NDCISA, and cooperate with the ND Foundation Seedstocks, ND State Seed Department, NDSU plant breeders, and others in the development, production, and dissemination of quality seed stocks in North Dakota and the surrounding region.

Standing Committees of this Association shall be as follows, with a maximum two-year term:

A. Audit Committee – To consist of three members appointed by the president and composed of members of the board of directors. This committee shall provide an annual review and audit of the Association’s financial transactions and present an audit report at the annual meeting.

B. Resolutions Committee – To consist of four voting members (1 per district) appointed by the President. Its purpose shall be to initiate, receive, review and present resolutions at the annual meeting

C. Certified Seed Committee – To consist of five members appointed annually by the president. Members shall be certified or registered seed growers during their time of service on the committee. The function of the committee shall be to discuss problems facing the certified seed industry and to relate concerns of certified and registered growers to the board of directors.

D. Seed Increase Committee – To consist of seed growers, county extension agents, certified seed conditioners and seedstocks director. The function of the committee shall be to discuss procedures and policy of the seed increase program. The committee shall consist of three per district appointed by the Board of Directors.

E. Government and Public Affairs Committee – To consist of three members appointed annually by the president. The function of the committee is to advance the policy and position of the North Dakota Crop Improvement & Seed Association

G. Membership Committee – To consist of 3 members appointed by the President for the purpose of member relations.

B. All funds from membership and fees shall be placed with the executive officer and shall be under the control of the board of directors.

C. The fiscal year of the Association shall run from January 1 to December 31.

D. The financial records of the corporation shall be audited annually in a manner approved by the board of directors.

E. No loans shall be made by the corporation to its members, directors or officers.

A. Any officer of the corporation (including a director) whether elected or appointed, may be removed by the persons authorized to elect or appoint such officer whenever in their judgment, the best interests of the corporation will be served thereby. The removal of an officer shall be without prejudice to the contract rights, if any, of the officer so removed. Election or appointment of an officer or agent shall not of itself create contract rights. (ND. Century Code 10-24-24).

B. Whenever any notice is required to be given to any member or director of a corporation pursuant to the statute or under provisions of the articles of incorporation or bylaws of the corporation a waiver thereof in writing signed by the person or persons entitled to such notice, whether before or after the time stated therein, shall be equivalent to the giving of such notice. (N. D. Century Code 10-33-68 and 10-33-39)

These bylaws may be amended (1) at any duly called annual meeting on motion by one or more certified voting delegates when a majority of the votes cast favor the amendment; or (2) at any regular meeting or special meeting of the association by majority vote, a quorum being present. Said amendment must be proposed in writing to the executive board and sent to each voting member organization at least seven days in advance of the meeting at which action is to be taken on said amendment.

*Note: Where sections in these bylaws have been footnoted with a N.D. Century Code citation, the cited section should be reviewed before any amendment is considered. 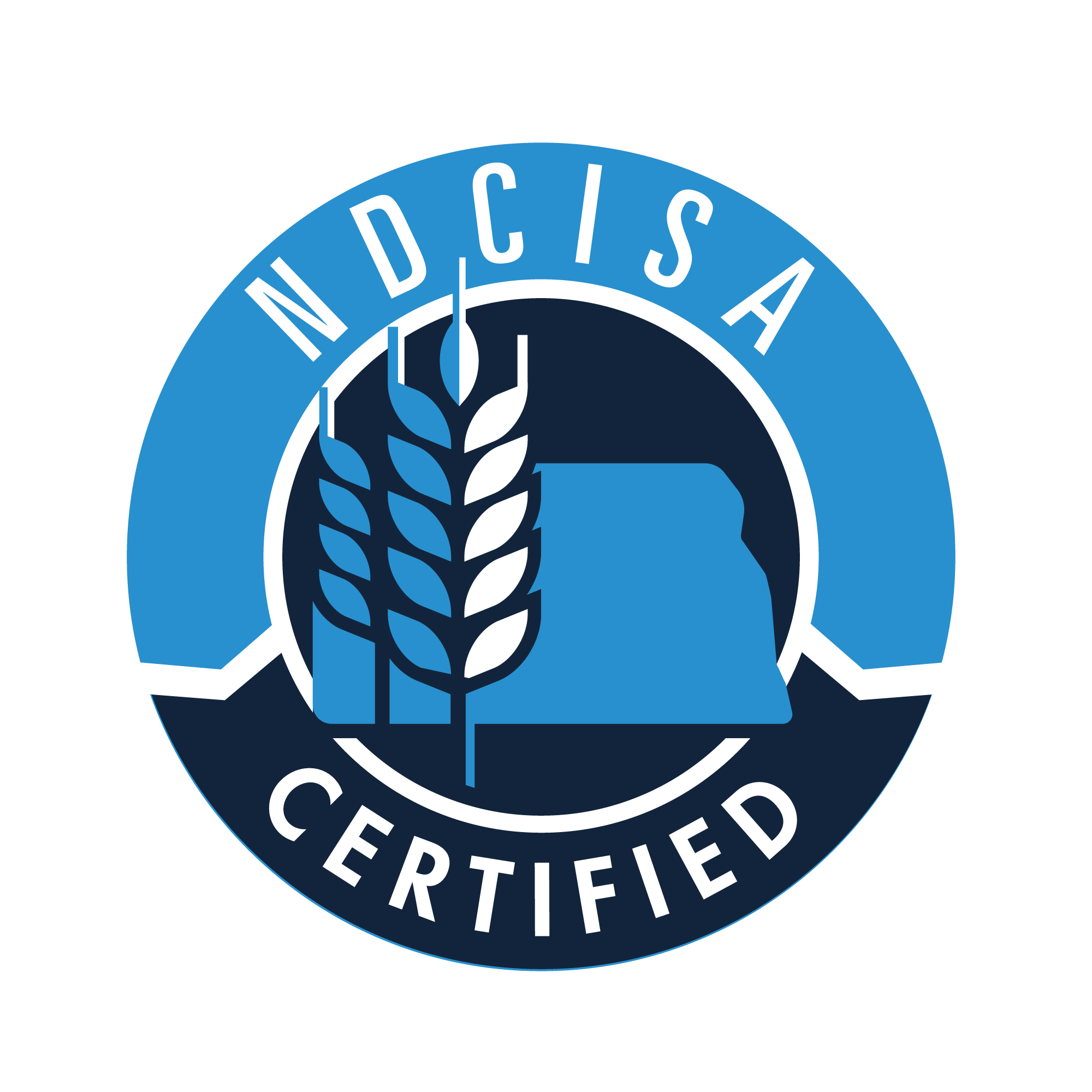